An Indiscreet Princess by Georgie Blalock 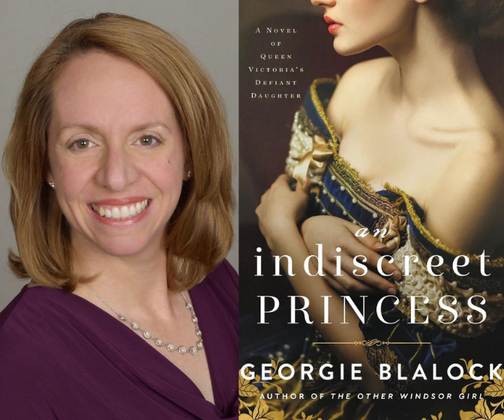 Before Princess Margaret, before Duchess Meghan, there was Princess Louise: royal rebel.

As the fourth daughter of the perpetually in-mourning Queen Victoria, Princess Louise’s life is more a gilded prison than a fairy tale. Expected to sit quietly next to her mother with down-cast eyes, Louise vows to escape the stultifying royal court. Blessed with beauty, artistic talent, and a common touch, she creates a life outside the walled-in existence of the palace grounds by attending the National Art Training School—where she shockingly learns to sculpt nude models while falling passionately in love with famed sculptor Joseph Edgar Boehm.

But even as Louise cultivates a life outside the palace, she is constantly reminded that even royal rebels must heed the call of duty—and for a princess that means marriage. Refusing to leave England, she agrees to a match with the Duke of Argyll, and although her heart belongs to another, she is determined to act out her public role perfectly, even if her private life teeters on the brink of scandal. But when a near fatal accident forces Louise back under her mother’s iron rule, she realizes she must choose: give in to the grief of lost love or find the strength to fight for her unconventional life.

PRAISE AND RECOGNITION FOR AN INDISCREET PRINCESS:

“A royal princess determined to create a hidden love, and a demanding queen who vows to keep her in her place—I couldn’t turn the pages fast enough. Rich in period detail, An Indiscreet Princess is a beguiling story of duty, power, and a young princess’s passion for art and love. A thoroughly engaging read.”  — Shelley Noble, New York Times bestselling of Summer Island

“Meticulously researched and vividly written, Georgie Blalock paints a detailed portrait of Princess Louise and her refusal to bow to society’s—or her mother’s—expectations, from Louise’s unusual admittance into the National Art Training School to her sweeping romance with a renowned sculptor. Fans of The Crown‘s Princess Margaret will adore this look at Princess Louise, the unconventional daughter of Queen Victoria, as she bends all the rules to live a life on her own terms.”  — Stephanie Marie Thornton, USA Today bestselling author of A Most Clever Girl

“Princess Louise was a woman out of her time: a creative freethinker with a strong will and a passion for living, who was raised in the restrictive environment of her mother, Queen Victoria’s court. In Georgie Blalock’s novel Louise steps out of history and into our hearts as she struggles to hew a fulfilling role for herself. It’s a fascinating glimpse into the pressures of being royal in an era when princesses had few choices, and a portrait of a very likeable, relatable woman who lived 150 years ago yet feels incredibly modern.” — Gill Paul, bestselling author of The Manhattan Girls

“Georgie Blalock has delivered a mother-daughter story of immense proportions. Especially because the mother is Queen Victoria and the daughter is Princess Louise, a rebellious woman determined to pursue a life of art and forbidden love. An Indiscreet Princess is a must read for fans of The Crown, Princess Margaret, and all things Royal.”  — Renée Rosen, author of The Social Graces

Author visits with Georgie Blalock are available via NovelNetwork.com.