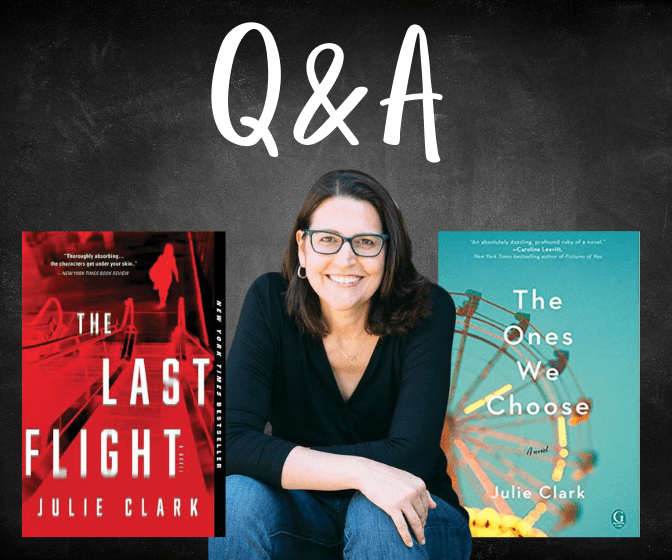 Q: Tell us a little about yourself? Perhaps something not many people know?

A: I grew up in Santa Monica, California, and currently teach at my old elementary school. My own children attended there as well. They will be third generation graduates from Santa Monica High School when they graduate.

Q: What made you want to become a writer?

A: I always wanted to be a writer – even when I was very young. I think reading books I loved – Blubber, Anne of Green Gables, any book with a horse at the center of it – made me want to write my own books someday. I made several false starts when I was in my 20’s and 30’s, but didn’t get serious about it until my mid-forties, when I sat down and wrote what would become my debut, The Ones We Choose. After that, I just kept writing!

Q: Can you share a little about what you are currently working on?

Meg Williams. Maggie Littleton. Melody Wilde. Different names for the same person, depending on the town, depending on the job. She’s a con artist who erases herself to become whoever you need her to be—a college student. A life coach. A real estate agent. Nothing about her is real. She slides alongside you and tells you exactly what you want to hear, and by the time she’s done, you’ve likely lost everything.

Kat Roberts has been waiting ten years for the woman who upended her life to return. And now that she has, Kat is determined to be the one to expose her. But as the two women grow closer, Kat’s long-held assumptions begin to crumble, leaving Kat to wonder who Meg’s true target is.

The Lies I Tell is a twisted domestic thriller that dives deep into the psyches and motivations of two women and their unwavering quest to seek justice for the past and rewrite the future.

Q: Do your characters ever hijack the story or do you feel like you have the reigns of the story?

A: Occasionally an idea will hit where I imagine a character going in an entirely different direction, or I see a twist that I wasn’t expecting, but I don’t really see that as my characters taking control. It’s more that my imagination goes in a new direction and I can see a new way to surprise my reader, which also sometimes surprises me. But I also wouldn’t say that I control the reins of a story either. I have a tendency to outline a new book, and then not really look at the outline again, or adhere to it at all. Outlines are just starting points for me. From there I can go in any direction. That’s the fun part of the job!

Q: If you could spend time with a character from your book, which character would you choose?  And what would you do during that day?

A: I would probably want to spend time with Meg Williams, a character from my next book. She’s a con artist who always has a story to spin, a lie to tell, and is always up for an adventure.

Q: What is something memorable you have heard from your readers/fans?

A: The responses that stick the most with me are from people who write to tell me that my books have impacted them in a profound way. The Ones We Choose is the story of a geneticist who is struggling to help her donor-conceived son fit in with the world, but it’s also about trauma and how it can embed in our cells, and it really resonates with readers. Likewise, hearing from people who read The Last Flight, who connect deeply with Claire and the abuse she faced – it’s gratifying to know that something I’ve written has touched someone so deeply.

Q: Who is one of your favorite authors?

A: Jodi Picoult, Anna Quindlen, Barbara Kingsolver, Tana French – these are instant buys for me, always.

Q: If you had to write yourself as a villain, what kind of villain would you be?

A: The thing about writing a villain is that you have to remember that to them, they’re doing what they think is the right thing, most of the time. So I would probably write myself as a villain with a heart.

Q: What would the main character have to say about you?

Q: What else would you like to tell us?

A: Thanks so much for reading my books! I appreciate each and every one of you.

ABOUT THE LAST FLIGHT:

Claire Cook has a perfect life. Married to the scion of a political dynasty, with a Manhattan townhouse and a staff of ten, her surroundings are elegant, her days flawlessly choreographed, and her future auspicious. But behind closed doors, nothing is quite as it seems. That perfect husband has a temper that burns bright and he’s not above using his staff to track Claire’s every move.

What he doesn’t know is that Claire has worked for months on a plan to vanish. A plan that takes her to the airport, poised to run from it all. But a chance meeting in the airport bar brings her together with a woman whose circumstances seem equally dire. Together they make a last-minute decision.

The two women switch tickets, with Claire taking Eva’s flight to Oakland, and Eva traveling to Puerto Rico as Claire. They believe the swap will give each of them the head start they need to begin again somewhere far away. But when the flight to Puerto Rico crashes, Claire realizes it’s no longer a head start but a new life. Cut off, out of options, with the news of her death about to explode in the media, Claire will assume Eva’s identity, and along with it, the secrets Eva fought so hard to keep hidden.

For fans of Lisa Jewell and Liv Constantine, The Last Flight is the story of two women—both alone, both scared—and one agonizing decision that will change the trajectory of both of their lives.

Julie Clark is the New York Times bestselling author of The Last Flight. It has earned starred reviews from Kirkus, Publishers Weekly, and Library Journal, and the New York Times has called it “thoroughly absorbing”. It’s been named an Indie Next Pick, a Library Reads Pick, and a Best Book of 2020 by Amazon Editors and Apple Books. Her debut, The Ones We Choose, was published in 2018 and has been optioned for television by Lionsgate.