A Memory and a Recipe From a Tuscan Thanksgiving 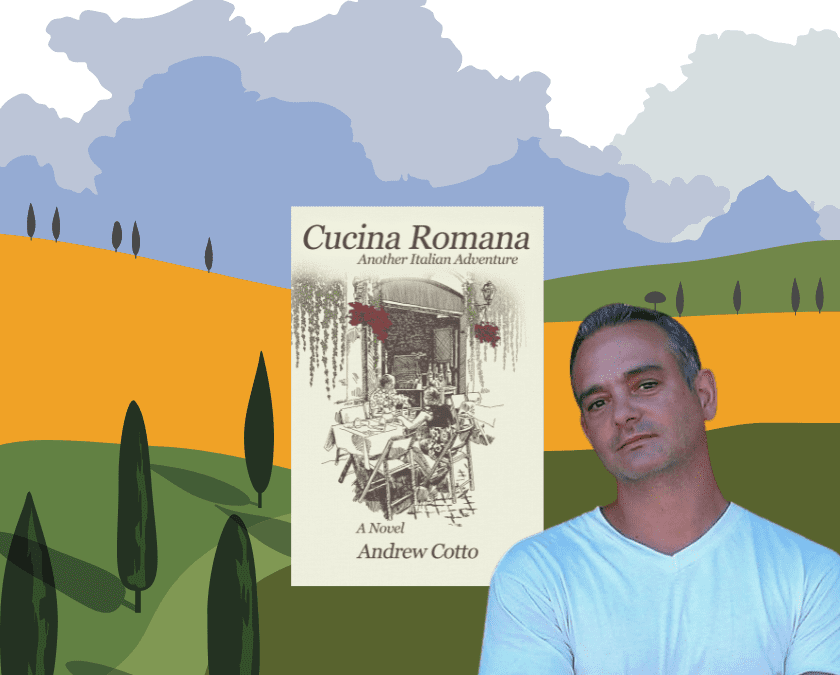 Author Andrew Cotto and his family spent an unforgettable Thanksgiving in Tuscany. He shares the memories and a special stuffed turkey recipe perfect for small gatherings. Try his unique take on turkey, and let Andrew know what you think (the whole menu is also included). Read it here.

“Beautifully descriptive and romantic, this is one Italian adventure you don’t want to miss!” –Adriana Trigiani, author of Tony’s Wife

With his dream of becoming an expat in Italy realized, Jacoby Pines travels on holiday from Tuscany to Rome where another Italian adventure awaits.

While exploring the Eternal City, Jacoby learns of the possible existence of a long-lost relative. A food-filled, wine-soaked quest for ancestry ensues that takes Jacoby to the landmarks of Rome and through its quiet corners on his way to discovering something beyond his wildest imagination.

Andrew Cotto is an award-winning author of six novels. A two-time recipient of the Readers’ Favorite Award, Andrew’s work has been championed by Publishers Weekly, The Brooklyn Rail, Booklist, The Mother-Daughter Book Club, Mystery Scene Magazine, Raven Crime Reads and more. As a journalist, Andrew is a regular contributor to The New York Times, La Cucina Italiana, Brooklyn Magazine, the Good Men Project and Rachael Ray In Season. He has also written for Parade, Men’s Journal, Rolling Stone, Condé Nast Traveler, Italy magazine, AARP, the Huffington Post, Teachers & Writers Magazine, 6sq.ft., Salon, Maxim, Babble, Life of Dad, The Brooklyn Daily Eagle, Relish, and numerous edible publications. An avid Italophile, Andrew adores all things Italy, especially the food and wine. Andrew also loves book club appearances. The navigation arrow to the right is how to arrange a visit from Andrew in person or online; either way, he is happy to prepare a cooking demonstration, as well.

Andrew Cotto is available for book club visits via NovelNetwork.com.