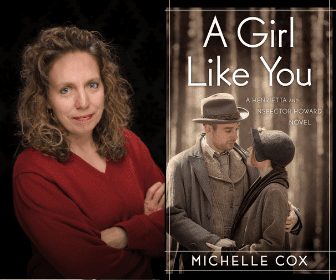 Beautiful Henrietta Von Harmon works as a 26 girl at a corner bar, Poor Pete’s, on Chicago’s northwest side. It’s 1935, but things still aren’t looking up since the big crash and her father’s subsequent suicide. Left to care for her antagonistic mother and seven younger siblings, Henrietta is persuaded to take a job as a taxi dancer at a local dance hall. Henrietta is just beginning to enjoy herself, dancing with men for ten cents a dance, when the floor matron suddenly turns up murdered. The aloof Inspector Clive Howard then appears on the scene, and Henrietta unwittingly finds herself involved in unraveling the mystery when she agrees to go undercover for him in a burlesque theater where he believes the killer lurks.

Even as Henrietta is plunged into Chicago’s grittier underworld, she struggles to still play the mother “hen” to her younger siblings and even to the pesky neighborhood boy, Stanley, who believes himself in love with her and continues to pop up in the most unlikely places, determined, ironically, to keep Henrietta safe, even from the Inspector if needs be. Despite his efforts, however, and his penchant for messing up the Inspector’s investigation, the lovely Henrietta and the impenetrable Inspector find themselves drawn to each other in most unsuitable ways.

Michelle Cox is the author of the multiple award-winning Henrietta and Inspector Howard series as well as “Novel Notes of Local Lore,” a weekly blog dedicated to Chicago’s forgotten residents. She suspects she may have once lived in the 1930s and, having yet to discover a handy time machine lying around, has resorted to writing about the era as a way of getting herself back there. Coincidentally, her books have been praised by Kirkus, Library Journal, Publishers Weekly, Booklist, and many others, so she might be on to something. Unbeknownst to most, Michelle hoards board games she doesn’t have time to play and is, not surprisingly, addicted to period dramas and big band music. Also marmalade.

“Fans of spunky, historical heroines will love Henrietta Von Harmon. Taking bets and serving drinks as a “26 girl” (operator of a dice game)at a local tavern in her 1935 North Side Chicago neighborhood, Henrietta helps support her mother and seven siblings. Needing more money, she takes a job as a dance-hall girl and meets roguish Inspector Clive Howard of the Chicago PD. He asks Henrietta to go undercover at a burlesque house, where girls have gone missing. Up for an adventure, and eager to have a reason to keep seeing the copper, Henrietta lies to her mother about how she’s spending her evenings and dons a skimpy usherette outfit. She gains the confidence of her new coworkers and talks her way into being a girl who gets called “behind the green door.” But does Henrietta really know what she’s getting herself into? And can Inspector Howard save her virtue in time? Henrietta is irrepressible, and fans of post-Prohibition moxie will anxiously await a sequel.” — Booklist, Starred Review“

“Michelle Cox masterfully recreates 1930s Chicago in A Girl Like You, bringing to life its diverse neighborhoods and eclectic residents, as well as its seedy side. Henrietta and Inspector Howard are the best pair of sleuths I’ve come across in ages—Cox makes us care not just about the case, but about her characters. A fantastic start to what is sure to be a long running series.” — Tasha Alexander, New York Times bestselling author of The Adventuress“

“Top 5 Historical Fication Reads for Romance Lovers” Chicago in the 1930s – be still, our history-obsessed hearts. Henrietta Von Harmon is struggling to maintain a positive outlook after the economic crash led her father to commit suicide. Responsible for her mother and younger siblings, Henrietta reluctantly takes a job at a local dance hall where the floor matron is soon murdered. Dashing inspector Clive Howard convinces Henrietta to go undercover in Chicago’s dark underworld of crime, and her mission for evidence leads to an undeniable romance sure to leave readers swooning. – Bookstr“

“Cox does an excellent job in her description of the era of the 1930s. Her characters are well developed and introduced in a timely manner. A Girl Like You is very intriguing, well written, and the plot very entertaining. Readers will be drawn into the sights, smells, and seedy side of Chicago.”  – Reader Views“

A GIRL LIKE YOU is available for purchase here.

Michelle Cox is available to visit with book clubs via NovelNetwork.com.